Complete Idiot's Guide to Success as a Mortgage Broker

Today there are more than 73 million homeowners in the United States – more than ever before in our history. The demand for residential mortgages is growing exponentially as home ownership continues to be an essential part of the American dream. Commercial mortgages, which finance apartment complexes, housing developments, office buildings, manufacturing plants, shopping malls, etc., are essential to the growth of our economy. In 2002, there were over $2.5 trillion in mortgage originations.

And at the very center of all these transactions, residential and commercial, is a mortgage broker. That's the professional who arranges the financing that transforms these dreams into reality. It's a demanding, challenging, lucrative profession for smart, savvy, creative, self-starters with strong people skills. Sound like you?

Exactly What Is A Mortgage Broker?

According to the National Association of Mortgage Brokers, he or she is: An independent real estate financing professional who specializes in the organization of residential and/or commercial mortgages. A mortgage broker is also an independent contractor who markets and originates loans offered by multiple wholesale lenders.

A mortgage broker is like a financial matchmaker. You work with a variety of lenders to help buyers find the right loan for them. Your job is not to provide the money for the loan. Your job is to find the banker or lending institution with a program that meets the buyer's needs. Nor do you service the loan once it's given. But you guide borrowers through the complex minefield of mortgage lending – and you work with lenders to match clients to their needs. It's a tough job, but incredibly rewarding.

A career as a mortgage broker is full of potential: financially, professionally, and personally. Given the strong long-term economic forecasts for real estate, you can be confident that there will be a need for smart mortgage brokers – like you. Let's put the housing market into perspective and see what the experts forecast about this industry.

Less than half of Americans owned their own homes at the start of the 20th century and many homeowners lost their homes during the Great Depression. But post World War II, homeownership rates began to rise dramatically, topping 60 percent by 1960. The rate slowly rose during the 1960s and 1970s, but plateaued during the 1980s. But declining mortgage rates and an expanding economy pushed homeownership throughout the 1990s, reaching a record high by 2003. National homeownership surpassed 68 percent in 2003 and long-term projections suggest it will exceed 70 percent by 2013.

While non-Hispanic whites accounted for most of the increase in the number of U.S. homeowners between 1994 and 2003, minorities made marked progress in home ownership rates. "During this same time period, the percentage increase in the number of homeowners among African Americans (25.1 percent), Hispanics (62.8 percent) and Asian and Pacific Islanders (103 percent) dwarfed the rise in non-Hispanic white owners (7.6 percent)." However, the homeownership rate among minorities still lags behind that of whites. In 2003, "less than half of African-American and Hispanic households owned their homes. In contrast, over 75 percent of non-Hispanic whites were homeowners."

Most of the gap is due to differences in economic circumstances and the age composition of minority populations. Income and wealth among minorities are typically lower than that of whites. The homeownership rate for households in the lowest income bracket is less than 50 percent; the rate for those in the top bracket is 90 percent. A higher income widens the choice of homes available for purchase and increases the likelihood that the household will qualify for a mortgage. Those with lower incomes find they have fewer choices in a lower price range in locations near their place of employment.

According to the National Homeowners Alliance report, there is also a higher share of younger households among minorities – and this group is less likely to be homeowners. In addition, a large number of Hispanics and Asians live in less affordable urban centers on the East and West coasts. Cities usually have higher housing costs, but offer more rental alternatives.

The National Homeownership Alliance forecasts "a rising homeownership rate [of] at least 10 million additional homeowners by 2013 with roughly one half of the gain accruing to minority households." Buying your own home has become a reality for even that segment of the population that had been previously shut out of the market because of mortgage programs like Fannie Mae, which provide financial products and services that make it possible for low-, moderate-, and middle-income families to buy homes.

The housing boom of the past decade, as well as the continued growth forecast for the future, is due to many factors. Certainly, it is, in large part, a result of record low mortgage rates. This helped drive a tremendous increase in home sales and home construction. It's also influenced by a growing number of people, "baby boomers," moving into their peak home owning years.

Another important force behind higher homeownership rates is a growing immigrant population. More than one-third of the increase in the U.S. population during the 1990s is a result of foreign-born persons entering the country. While it takes time for immigrants to move into homeownership, according to the U.S. Census Bureau, for those who arrived more than 30 years ago, their homeownership rate surpasses the national rate.

An American Housing Survey reveals that approximately 15 percent of homes are purchased without a mortgage. More power to those buyers! But for most of us, we're going to need a mortgage when buying a house. Most people understand what a home mortgage is, even if they aren't familiar with the exact details of some of the new lending programs. Educating potential homebuyers is one of the important roles mortgage brokers play. But there are many other variations of mortgages that brokers also offer.

With home prices rising, mortgage rates declining, and the tax code limiting interest deductions to mortgages and home equity lines of credit, many homeowners are refinancing. For some, it's an opportunity to lower their monthly payments. For others, it's a chance to convert an adjustable rate into a fixed rate mortgage or to simply get a lower interest rate. Others choose to cash out some of their home equity for debt consolidation, home improvements, education costs, or a combination of reasons. Over the past 10 years, 39 percent of mortgages were refinance originations.

Senior citizens who own their own homes may choose a reverse mortgage to provide them with tax-free income. It's the opposite of a traditional mortgage where the homeowner borrows money and then repays the loan plus interest to the lender. A reverse mortgage pays a monthly income to the homeowner, and when the homeowner dies, sells, or fails to live in the house for more than 12 months, then the reverse mortgage becomes due, including accrued interest. But the homeowner is not responsible for repayment, the home is the security for the loan. The homeowner can continue to live in the residence for as long as he lives, no matter how small the equity becomes. There are no restrictions on how the money can be spent, and the homeowner's credit and income are irrelevant.

The non-conforming market includes mortgages for cooperatives (co-ops), multi-family dwellings, and condotels. This is a growing, exciting market and mortgage brokers help make these deals happen.

A cooperative is a building that is owned by a corporation comprised of the tenants of the building. The number of shares a tenant holds is dependent on the apartment size, view and location. The tenant shareholder has the right to occupy the apartment as his or her home by holding a proprietary lease to that apartment. Mortgages for these types of apartment are considered non-conforming.

Don't confuse coops and condos. In a condominium building, each apartment is individually owned and the unit proprietors own the common parts of the property, like the grounds and building, jointly. Condominium buyers apply for traditional home mortgages.

But a condotel is a condominium that operates like a hotel with many of the amenities you'd find at a four-or five-star hotel. Generally, condotel units are delivered fully furnished, typically with high-end furniture, appliances, and fixtures, and the cost of the furnishings is included in the price of the unit This is a relatively new concept in vacation home ownership and the mortgages for these types of units fall under the non-conforming umbrella.

A smaller market, but a potentially important one, is the second or vacation home. The growth in the number of buyers interested in second homes has been modest over the last decade, but that may change. It appears that baby boomers have not embraced second homeownership to the same extent as previous generations. But demand may increase if the current unpopularity of foreign travel continues and if baby boomers choose to become semi-retired, rather than fully retiring or continuing to work.

Finally, while banks handle the majority of commercial loans, a small percentage of mortgage brokers are players in this field. These types of mortgages cover bigger projects including apartment buildings and office buildings, and can range from $500,000 to more than $500,000,000.

The mortgage business is huge and with the growth predicted for the next ten years, the need for experienced mortgage brokers becomes clear. Experts predict that mortgage originations will average nearly $3 trillion per year over the next ten years. Here are some of the ten-year projections from the National Homeownership Alliance:

* First time buyers will remain a major component of the market, buying about 24 million homes over the next decade.

* Through competition, brokers pass on their origination cost advantages to the consumer
* The results of the report challenge the view that loans from brokers are more expensive because of broker steering (sending clients to lenders who pay the highest fees to the broker)
* There is an overall price benefit to using brokers
* The benefits of using a mortgage broker appear to hold for even vulnerable market segments.

Mortgage brokers provide buyers with an expert mentor to navigate the complex mortgage origination process. By offering superior market expertise and direct access to many different loan programs, the mortgage broker provides buyers the most efficient and cost-effective method of obtaining the right mortgage that meets the consumer's financial goals and circumstances. Whether it's purchasing a first home or refinancing an existing home, whether it trading up to a bigger house or scaling back to smaller quarter, whether it's buying a vacation home or a commercial property, mortgage brokers make the difference. Are you ready to join this profession? 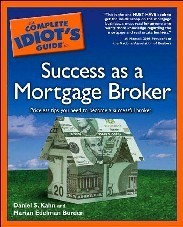 Complete Idiot's Guide to Success As A Mortgage Broker

Break Into The Brokerage Business.

Here is a step-by-step handbook to joining this elite group. Written by an accomplished mortgage broker with more than 15 years in the business and 2,000 deals to his credit, this book covers everything from whether or not real estate financing is the right career move to how to master the skills necessary to be successful.

• Overview of a day in the life of a mortgage broker—including the pros and cons of the career;

• A self-test to help readers determine if the brokerage business is right for them;

• In 2004, there were over $3.8 trillion in mortgage originations nationwide—an all-time record— according to The Mortgage Bankers Association.

About the Co-Author
Daniel S. Kahn is the president and owner of Financial Access Corporation, a mortgage brokerage firm operating out of Newburgh, New York. A career broker for more than 15 years, he knows the mortgage business inside and out. He has originated more than 2,000 mortgages worth over $500 million.