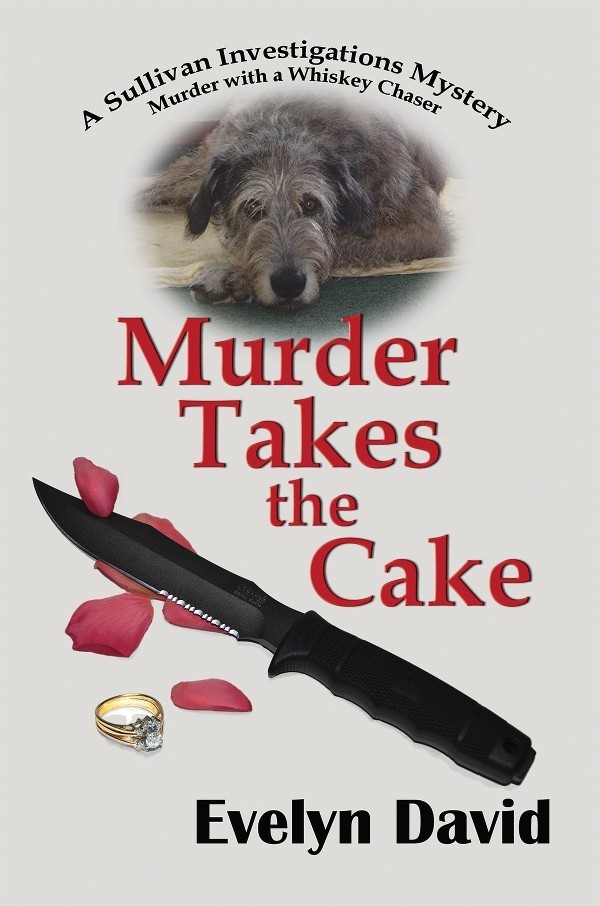 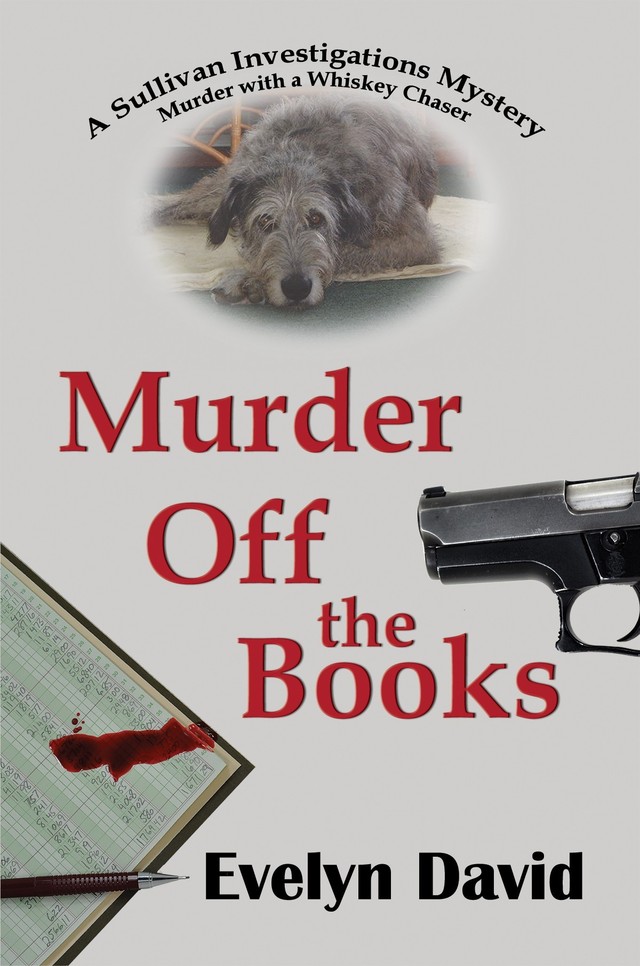 This is the page devoted to the fiction my writing partner, Rhonda Dossett, and I co-write under the pen name "Evelyn David." Please check out our Evelyn David website for all the latest information. As of March 2011, we are writing a cozy mystery series, a funny paranormal e-book series, and a variety of short stories. We've recently published Love Lessons, a collection of short romantic stories.

Murder Off The Books
Chapter 1

The sound of a human head cracking against rock was surprisingly loud. As the man fell against the wall of the clock tower, the killer unscrewed the silencer from the gun, musing about the number of details involved in planning and executing a perfect murder. And this was certainly not a perfect murder. Several loose ends were going to need to be tied. Next time a list might come in handy.

Murder victims shouldn't have to wait. Discount store shoppers, people with broken dental crowns, drivers in the middle of rush hour. Those people deserved to wait. Expected to wait. But not...

She was tired of being last on everyone's "to do" list.

She really couldn't stand cowering in the dark. If she was going to cower, she'd do it in the light—just like always.

She clicked on the flashlight she'd grabbed in her frantic dash from the bed to the walk-in closet.
Much better.

She hastily clicked off the beam and disappeared back into the shadows.

She left the closet door ajar. It was like everything else in her life—slightly warped. Once fully closed, it couldn't be opened from the inside. She'd be stuck in there until…until what? Who'd rescue her?

She wished again that she hadn't left her cordless phone downstairs.

She wasn't going to be able to run.

Her right foot was numb.

Rachel Brenner shifted, stretching out one bare leg, quietly trying to move her foot, thinking that at some point she might need to slip down into the living room and search for her second cordless phone, the one that fit into the charger on the kitchen wall and had been missing for a couple of days. It was probably under the sofa or between the cushions. That's where she'd look first—if she had time.

"Enough," she whispered. "Concentrate on something besides the damn phones."

Dust. The closet floor was cramped—and dusty. Stifling a sneeze, she decided she had some serious cleaning to do if she survived. If she didn't, well it would be someone else's problem.

She wiggled her toes until the feeling returned and then rose to her feet intending to open the closet door and listen.

Two steps. Her heart was pounding so loud that she couldn't think, much less hear.

Looking around, she grabbed a twenty-year-old trench coat that had belonged to her ex-husband and rolled it into a ball. She pressed the material against her chest to muffle the sound.

Thoughts of Andy cleared the noise from her head.
She cracked open the door. And listened.

Nothing but the furnace and the sound of her own ragged breathing.

She held her breath and opened the door a little wider.

Nothing. She didn't hear...

No—there was something. Something...just... there. A shuffling sound—still downstairs.

Rachel carefully closed the closet door again and returned to her spot on the floor, this time sitting on the bunched trenchcoat, instead of hiding behind it.

She hugged her knees to her chest and stared at the bits and pieces surrounding her and wondered what would happen to all of her things when she was gone.

Sam would be the one to have to deal with selling or giving away her lifetime accumulation of clothes, costume jewelry, and mis-matched china and silverware. Oh, he'd probably keep a few things. He might want some of the old family photographs she'd organized into albums. Thank goodness she'd gotten them labeled last year during one long, miserable night right after her divorce was final. At least Sam would be able to tell his children about her side of the family and put the correct name to the face.

Her brother wouldn't be of much help. Dan had his own problems. He was settling into a new job and a new life. She sighed and stretched out her legs. Rachel nudged a shadow in the corner with her toe—a well-used hockey stick—another remnant of her ex-husband's, something from his glory days.

She flicked on the flashlight again and played the wavering beam over the clothes, empty suitcases, and shoes. God, she had too many shoes. She glanced at the row upon row of neatly labeled shoeboxes lining the shelf above the clothes rod, and the additional stacks on the carpeted floor beneath. Setting down the flashlight, she picked up a nearby box and peeked inside.

Beautiful black leather pumps, $89 dollars on sale—never worn. She glanced in another box. All were purchased within the last two years and she'd never worn any of them. Her well-worn favorites were in a heap by her bed: Nikes, Reeboks, high-topped, brightly colored basketball shoes. The pumps, well, they were mostly just...

Rachel set down the box. They were a mistake. They were her way of trying to be more like the women Andrew Brenner had been screwing the last three years of their marriage. She frowned and put the lid back on the box. Like the woman Andrew was living with now. Tina of perky breasts and four-inch heels.

Tina would love all those shoes. Andrew would probably give them to her too, Rachel realized. Help out Sam by taking them off his hands. Her shoes on Tina's feet. No way.

The spurt of anger and the loud sound of a closing door gave her the courage to act.

Rachel got up and grabbed a pair of sweat pants off a hanger, pulling them on. She picked up the hockey stick and stalked out of the closet.

Tina could buy her own damn shoes.

Murder Off The Books - synopsis

Murder Off The Books
A Sullivan Investigations Mystery

Is your tuition paid up? College finals are killers - or maybe it's just the people who count the money.

A retired DC cop and a fast-food loving Irish Wolfhound search for the campus murderer while dealing with a scooter-riding senior with dreams of trenchcoat adventures, a crazed exterminator looking for his roach mobile, and an uptight mortuary make-up artist whose midlife crisis isn't any less stressful because her clients don't complain.

A half-million dollars has vanished and a college comptroller is dead. Mackenzie Sullivan, recently retired DC cop and newly-minted private detective, really has no interest in the murder. Mac just needs to find the embezzled money for the university's insurance company. Finding the killer is a bonus that he's not sure he wants to earn.

As Mac and his partner, Whiskey, an Irish Wolfhound with gourmet tastes, dig deeper into the investigation, it becomes clear that the money and the dead guy are part of the same deadly package. Mac fears that more deaths will occur before he can figure the mystery out. Standing in his way is Rachel Brenner, an unlikely and very reluctant obstacle.

For Rachel, cosmetician to the recently departed, death doesn't bother her, but murder does. Recently divorced and plagued by self-doubt and financial troubles, her problems intensify when she finds out her brother is the number one suspect in the college murder. She believes in her brother, Mackenzie Sullivan, not so much.

The book opens with Rachel hiding in the closet, while someone ransacks her home. Mac and Whiskey are on a stakeout, watching Rachel's house in case her missing brother appears. When a frightened Rachel grabs a hockey stick and walks out of the closet to confront her intruders, the tone of the book is set. Surviving the break-in, Rachel discovers two things. Her thief has a penchant for ham, and the police are more interested in solving a murder than finding her purloined pork, even though it quickly becomes clear that the two incidents are related.

Mac continues his stakeout of Rachel's home and workplace, despite interference by well-meaning neighbors, friends, and the Bug Man, a crazed exterminator. Mac's best friend, Jeff, owns a funeral home and has a habit of acquiring used vehicles in exchange for caskets. Jeff's fleet gives Mac a ready supply of wheels for his stakeouts (ice cream trucks, plumbing trucks, taxicabs, and hearses) but as Mac quickly learns, if you're going to drive around in a plumber's truck, you're going to have to plunge some drains.

Before the story hurtles to an exciting conclusion, one suspect convincingly dresses in drag - although wearing Rachel's scarf is a stupid mistake. Whiskey gets kidnapped - angering Mac, which is always a big mistake. And a young college co-ed is murdered - which means that the killer is angry and out of control - a fatal mistake. Trust Mac, Rachel, and a recovered Whiskey to find the killer, but not before a nail-biting confrontation.

Murder Off the Books is filled with characters that you'll love, humor that will make you laugh out loud, and a mystery chock full of twists, turns, red herrings, and a roller coaster of ride to death.